Why is Important to take a Stand against people as Pewdiepie 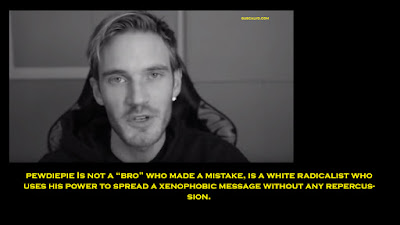 To understand about Piewdiepie or Felix Arvid Kjellberg racist tirades or as he mentioned "slips or oopsies" is necessary to understand the historical background that Nazis planted on Sweden and how over the decades their influences never diminished but instead thrived.

Sweden has turned into one new centers for the radical European right, is quite weird to say because even with the social equality and the country democratic values and human rights; is a contradiction because for almost a century, Sweden has been the epicenter of a large excesive amount of racists, nationalists and fascist factions.

Albeit we don't need to go far away, in Sweden getting the ability to congregate in public spaces regarding your political and ideological  you need a permit of the local police department which on the first week of July of 2018 the Nordic Resistance Movement found a spot to spread their hate on public space because they obtained a permit to congregate.

There were critics towards the demonstration but it opened a window towards the racism in the Nordic regions to the world, which even with the lax laws towards public gatherings it has shown that life ain't perfect in Sweden or Norway, that even with the equality that is sold as a form of branding there are several social issues as inequality and the lack of government control to put a hold on xenophobia and hate groups.

Felix or Piewdiepie, or whatever you want to call him is a product of the society he lives (just like many of us) but also over the last decade he has become one of the biggest influencers of the world by his Lets Play channel which let him appear on pop culture media and gain a massive 70 millions followers, but also the media itself are the ones who keep defending his behavior on their vast majority, as if you type down on Google Pewdiepie racist much of the cases focus him as "troubled" and a few actually dare to say his racist tendencies and the shallow apologizes he creates.


One of the most recent cases was the endorsement of E;R a content creator that is wide known for their antisemitic and vitriolic content and E;R's channel grew almost 15K suscribers since the shutout. A problematic that is extremely concerning is that Youtube biggest content creator has become some sort of unofficial poster boy for the white nationalists across the globe but also he can become a key figure into indoctrination of younger audiences.

Usually within the communication theories, leaders of opinion or as they are called lately "influencers" can execute a power over a demographic that is extremely "innocent" due the lack of critical thinking and analysis of world politics and socio economical impacts that are tied with violence and movements of the masses.

One aspect that is good to know is when Felix started or at least if he was already the person that showed toxicity on his videos, my bet he was already as that when he started his channel, a mere reflection of what the gaming community is. The toxicity on the gaming community is widely known such as the case of Feminist Frequency, just to name one of many in which the fragility of the "bro's" egos tend to be extremely fragile that they can't take any criticism or any commentary that breaks their xenophobic bubbles.

Why is important to take a stand against people as Pewdiepie? Because you can't let someone promote hate, even if people will say everyone is entitled to free speech there are also consequences when you promote hate and if you as a person stay quiet then you are being an accomplice of hate.