What if Peach crown is another Super Crown 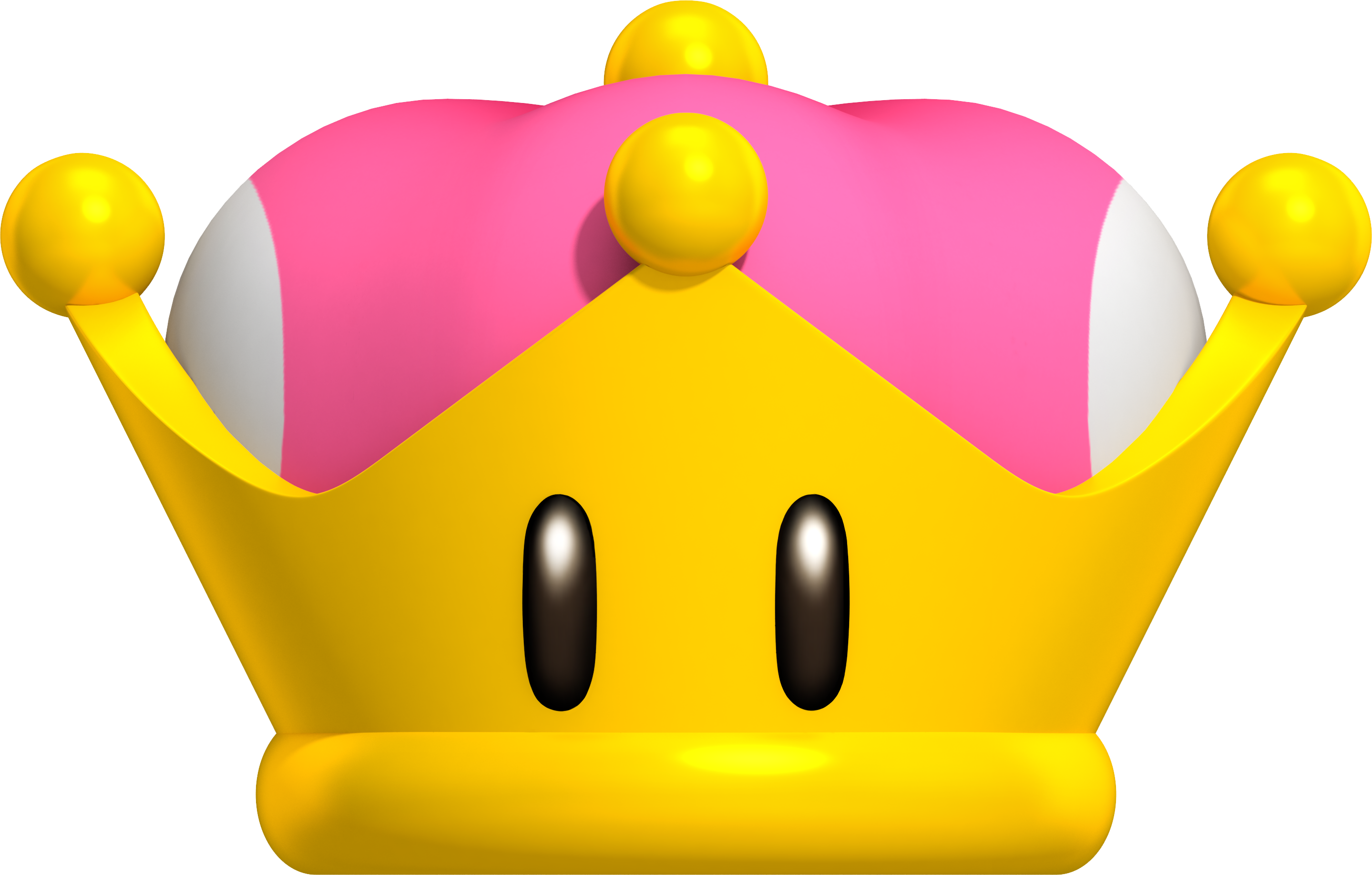 I been thinking for a while, and this is a mere what if? Nothing to be taken serious. With the introduction of Peachette and fan made Bowsette, the item of the Super Crown has become some form of staple in the vast arsenal of the war items in the Mushroom Kingdom, but what if this item had played a role towards evolutionary patterns but also political ones on the Mushroom Kingdom?

Think it and it wouldn't be strange, why someone as Peach would look more human than the rest of her subordinates? I am not talking on the Odyssey game but rather on the Deluxe games that follow the classic story and the linear pattern of the games without placing any other characters of the expanded universe.

With this item I been thinking that the Peach we know is a mere construction to keep peace in the Kingdom, that in reality there has been many of them and when one dies another one takes her place making Peach to be "eternal", think how much Toadette looks like Peach when she enters the super form, but is not the first time we see something similar, what if the concept of the hats or accessories transforming characters into others was saw for the first time on Super Mario 64 DS.

This makes me think that hats and crowns are items of war in the Mushroom Kingdom and their use is to bring symbols of peace but also to create soldiers. Toadette transforming into Peachette made me thought that Peach herself was a regular Toad before obtaining the crown she sports and since the Toads are a gender less species the construction of a more human body is just a mere commodity and just made for protocol.

Now imagine if Mario and Luigi are Toads that were granted also similar abilities because of their hats, that means the military defenses of the Mushroom Kingdom could be almost impenetrable if several Toads at the same time sport the plumblers hat they would become a force to be feared with. While in the case of Peach, just having an extra crown or preserving any newer one could mean that the Princess would be replaced and nobody would notice as the crown itself would give the wearer the same physical appearance of Peach, which at the end the question is "where there was a real Princess?"
Posted by Gus Calvo at 11:50 PM No comments:

A Year in Cosplay Part 3

At this moment, it has been a year for me going to the comic book conventions; each one of them is a complete different world from one another and every year even the experience is completely different. One goal that I have for my second year is to create a full line-up for the conventions that I am going, so far my I have a few choices such as Sans from Undertale, Morty, Evil Morty and to do something steampunk along with Deadpool, I still have until May to decide what I want to do and how much I want to invest.

My yearly cycle ended with Mega Con Tampa which was the first one I went for the full duration mostly because I wanted to see Stan Lee and also to learn more of the experience. It has been an interesting year going through the different ones as I saw that each con has their own set of rules but also it attracts different set of people.

You can find different cosplayers going to i.e. Tampa Bay Comic Con from what you see in Metro Con and Mega Con Orlando, so if you are going to take photos you have one chance only to request them as cosplayers go on a limited time and much of the time they only have their cosplays for a certain time of the day before they change to another.

Depending on the area, vendors will usually go to the same cons, some vendors are only found on convention grounds and they do not offer their services outside the events, which is good to keep their business cards as they can always become handy if you are looking to update items on your cosplay or to purchase something in particular.

There are plenty of Cons in Florida all year long, I think the last big one is on December 14th and that is Holiday Matsuri in Orlando which it will be the first year I am going and I honestly don't know what to expect, but after going to 10 in the last 12 months I learned which one is my favorite, which one I can take better photos, which ones I am going for the full duration or other ones I am going exclusively for the panels.

Metro-Con so far has been my favorite ever in Central Florida, is just perfect on terms of fan approaching, you have amazing cosplayers everywhere, the hosts walk among everyone, you can take photos with them in the hallways; the panels incredible and the shows the cosplayers put on every corner are worthy for the photos but also entertainment.

Price wise Metro Con is probably the best one in terms of being budget friendly, since autographs do not cost (I don't know if rules will change next year) guests usually sign the merchandise you buy from them, they don't charge for photos either, the vendor's hall is small but has a good selection and is not limited only to the vendor's room as you can find some other vendors around the convention center.

Metro also is the only one that has a Maid's Cafe in all the Tampa scene, which adds an extra value and from what I heard the food in the cafe is really tasty and affordable, I am definitively buying it for next year as I missed this year because of doubts as if I was going to like it but after talking with the maids and reading the reviews I realized I made a mistake so I postpone it as I also never been to a maid's cafe before.

There is nothing much I can say, but next year I am going to write a series of entries towards each convention and each entry will be based on the days I am going. Thank you for reading me and I hope you have a nice day also.

The Seminal Process of Adventure Time

It made me think, this was the first show of it's kind of the second decade of the 2000's mostly because it grabbed elements on the narrative from shows of the early 90's and anime style because there was a narrative, a well developed mythology, characters that grew up with the seasons and cohesion between the episodes; it quickly became a fan favorite because it showed a complex narrative whenever the programming in Cartoon Network was in decline.

On the first couple of seasons the show seemed to be oriented mostly as a Shonen-style program, nothing out of the ordinary that premise showed "just a boy and his dog having fantastical adventures" until the episode Business Time where a frozen business men who appeared in a glacier gave the first indications about the setting of the show.

We have to notice that even it it was a kid's show it was set in a post-apocalyptic land where essentially humanity was whipped down because of the Mushroom War which also led to the evolution of items such as candy, animals and other objects as the predominant life forms of the planet. The Mushroom War is the quintessential story element of the show because it's the moment in the timeline where everything develops into what we had as the arcs in Adventure Time. Through the Mushroom War we learned as being the viewers that the universe in the Land of Ooo is far more complex than the setting it's placed, it's a world where humanity is on the verge of extinction due the ruins that are shown on almost every adventure Finn and Jake step in, is a show that even if it's aimed to children it exposes the idea of a post nuclear war setting.

Is not only to the scenario, on several episodes there are corpses and nuclear weapons, even on the episodes centered around Simon Petrikov prior his transformation showed that the world was already savaged by the war or at least in the process; it's almost important to notice that in the universe of Adventure Time - magic is real - and there is a pantheon of deities that form part of the cosmology.

It wasn't a common kids cartoon, thanks to services as Netflix it also got aimed at adults because of the dynamic between the characters, all of them being more than stereotypes they represented. Over the years, there were implications about the relationship between Princess Bubblegum and Marceline as they seemed to be a couple making them one of the first lesbian couples in a children's cartoon.

Over several episodes there where hints and we learned their past story but it wasn't fully as it was shown to be mostly exes, as in one episodes Princess Bubblegum seemed to had a shirt that Marceline gave to her and kept after they broke up, mostly because the shirt had Marcy scent around it; but, it was until the series finale when we finally saw the real feelings they where holding for each other after a long time.

Maybe if the show runner's would made a different plan, the arcs would had shown a stable couple trying to survive in a hostile enviroment instead of a more platonic scenario that lasted for almost the entire duration of the show, yet we have to remember thanks to Adventure Time it opened the doors to another cult favorite which is Steven Universe and it does has a more diverse representation towards a queer inclusion in children television.

The show itself it was refreshing because on the surface it was quite lighthearted but the appeal that reached to adults with the clever writing made it interesting; it's good to note that the adults that enjoyed the show today where the children in the 90's who woke up early to see the Saturday morning cartoon and moved that enthusiasm of cartoons up to the early 2000 and the influence of Anime and Manga in the American society.
Posted by Gus Calvo at 8:23 PM No comments: