I been thinking for over a month what approach I can take writing this entry, and today I found the inspiration at Metro Con Tampa, which is an anime and video game convention but it also bring some really good cosplayers to town, as well fans of the seminal show of Rebecca Sugar "Steven Universe"

Today I finally saw with more clear eyes after last weekend at Metro Con in Tampa, Florida; the fans (at least the segment who aren't toxic) found a way to express themselves not only through what happens on the cartoon but socially.

The convention was the first place I could finally see it on my many LGBTQA+ enjoyed the show so much (including myself) and the importance of the themes it offer. Let's start that the show itself is set on a fantastical enviroment with aliens but also it follows topics as acceptance, happiness and finding your true authentic self.

The show itself can be compared to the pop culture status that Avatar: The Last Air Bender had 18 years ago, it's one of those rare shows that can reach to people easy because of the message it offers but also that it aims to the community which most of the time is ignored in the prime time television. At the convention I realized how critical how Rebecca's creation has been, especially in the last two years were the most vulnerable point of the LGBT being the Transgender, gender non conform, non binary parts of the community have their rights attacked over and over, and having a show that is inclusive gives a voice of reaffirmation to their identities but also having a space of self-expression without fear. 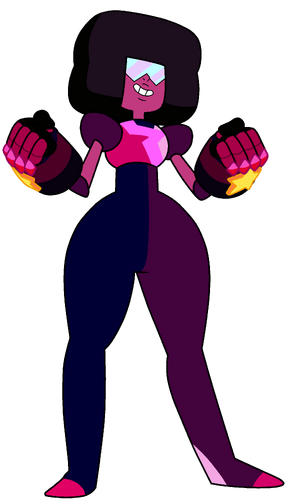 If we analyze the characters, much of the main characters that are the gems have no gender as their bodies are just a mere construction of light, like hard-holograms, they can modify their own bodies but they always go by their personal pronouns which are always she and live in a matriarch oriented society; each gem also have a peculiar ability to fuse and create a new form of life while the new form of life can act independent, the gems that compose the new creation need to be under constant harmony to keep the new one stable.

Gems such as Garnet (and by default Ruby and Sapphire) act on the spectrum that an emotional stable partnership can originate wonderful results into tow individuals, but also it shows that gender itself can be fluid, that we aren't bounded to our own preset notions about who we are an individuals.

We can see main characters are gender fluid, not only the main Gems but Steven himself, as he doesn't comfort with his boy attires but on ocassions he dress with women clothes (sure it can serve for comedic purposes depending on the view) but also when he and Connie fuse they become a different persona, a persona that is not referred by male or female pronouns but rather by neutral such as they or them, which I can't think of a television show on mainstream and less in a children's show.

Not only the show focus on the dynamics of who we are, but with who we relate to and who we love. Maybe the best example is with Pearl and Pink Diamond, is an unrequited love in which also mixes the different social status people have depending on where they were born and money. Pearl fall in love with Pink but Pink never reciprocate it, even if they were close enough to do a fusion, Rose never loved Pearl.as a potential partner but rather as a close friend.

The structure of the episodes is quite simple that a child can understand that the gems are complex beings, that use female pronouns but are agender, they can be aromantic or even express feelings; and the same episode structure can be enjoyed by adults because they are seeing the drama and epic elements that maybe a child can dismiss, albeit to a generation of children that are more vocal and there are parents who can be supportive of identity expression and sexuality, Steven Universe offers what other shows don't which is the ability to connect with their audience on a one on one and give them ideas on how to express their creativity in public spaces but in private, but overall the show gives a message of unity that we as a community we need. 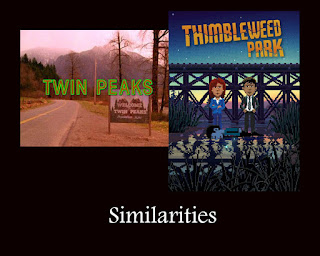 The idea of the game turned into an audiovisual format is not that strange as it can offer some really solid arcs that can developed into a bizarre world similar as the ones created by David Lynch with his magnum-opus.

The more I played the game, the more I realized that the inspirations of Thimbleweed Park and Twink Peaks are almost on a parallel level, i.e. both are settled on locations that seem common, such as Twin Peaks that is situated in Washington, Thimbleweed Park seems to be located somewhere in Oregon but honestly the ultimate end of the location is far surreal than anything else.

The two audiovisual products contain supernatural elements, narratives that let the players and viewers to explore different time frames but also on how the two start with a murder, Laura Palmer on Twink Peaks and some random Russian guy on Thimbleweed that honestly speaking has nothing to do with the development of the storyline but serves as an excuse to bring two of the five protagonists to Thimbleweed Park.

Much as Twin Peaks, TP has different perspectives that offer several angles about the story line; in theory the story can sound complex on the first run of the game, as it offers different pieces of information mixed with some red-herrings that make everything almost difficult to place in order; same with Twin Peaks, watching the show once is not going to be enough to process everything as several stories interlock with each other.

The two agents mimic the behavior of Agent Dale Cooper, as they embark into a surrealist trip that takes them to a world that doesn't seem to be, a world where everyone has fled the town the leave and there is not many people behind who live there; there is an air of mystery in which everything seems to be surreal; opposite to Agent Cooper, Agent Ray and Reyes play the classical good cop and bad cop in a dynamic that try to uncover the mysteries of the town by their own.

Albeit the divergence point of the characters development is that a lot of their motifs are left unexplained such as who really they are, and what they expect to find in Thimbleweed. A problem with the game lays on the narrative, it's extremely vague and can turn anticlimactic in certain moments, where the ending comes and how the characters develop.

Other similarities is that the game takes places on the 80's mimicking the era where Twin Peaks take place. The 80's seem to generate an influence on how the game developed, such as references to Amiga computers, hexadecimal codes, pay telephones, meta references about the graphic adventures but also on how the clothing influenced the characters and music. Both products in certain way showcase the era they are settled.

Talking about the era, even on both products technology influenced how it was shown, the 80's was a moment in time where technology developed and personal communications took place and revolutionaized the way we see the world; cellphones could be the key before anything else, and in Twin Peaks as well Thimbleweed cellphones play a role towards into finding a solution to the mysteries but on how the characters interacted with each other until the end.

This list will be expanded later...
Posted by Gus Calvo at 11:18 PM No comments: