A Short Analysis of Heathcliff 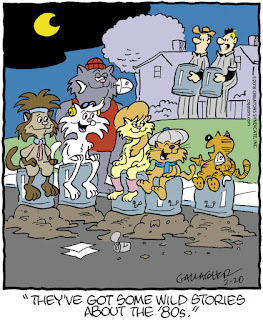 As far I've remember, I had a fascination with Heathcliff the Cat, I always remember reading it on the comic strips of the newspapers whenever I traveled to the United States thinking it was a nice sequel of the 1984 cartoon, which is the year I was born but I remember seeing Heathcliff and the Cattilacs way into the 1990's, and not even knowing there was a previous show in the 1980's as it never got a proper distribution in Latin America.
By that moment the impact of Garfield was powerful worldwide, it was the era also where Calvin and Hobbes was outsourced to be published outside the United States and I was mesmerized by the influx of American funnies or comic strips. the diaries in Colombia weren't strong as the ones in the United States with cartoons and as a kid in the 1990's back in Latin America I was visually experiencing something I never seen before, American comic strips and I am still fascinating by them because some of them are non-sequitur and other goes on arc, but what it got my attention the most about Heatcliff is something many other people born before the advent of the Internet it was a ripoff of Garfield while it was the opposite way Jim Davies ripped off the concept of George Gately albeit ht etones of the strips are vastly different especially after the passing of Gately which his nephew Peter Gallagher inherited the strip and it turned it in to a piece of Dadaistic non-sensical pop culture art. 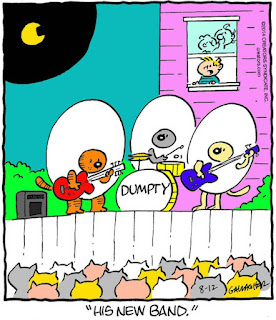 The strips have no sense, at least at first sight or even if you try to place it on a deeper meaning there are none. It seems on an epistemological level to understand the identity of anarchism and the Dadaism, is the notion of truth and the roles that the artist and philosopher play together "is just the concept of absurdism, where no method is regarded as indispensable" where there is an opposition to universal standards and universal laws.
It's a setting where all contact with  world has been lost and the stability achieved, and the semblance of truth is achieved through conformism. Is probably the most coherent way to explain why the humans are submissive to their strange environment in which Heathcliff seems as the catalyst of the madness in Westfinster where everything goes
There is no sense whenever is just looked at random times, even on the progression of the comic strip there seems to be an influence of the Family Circus but it diverged on the point where it became a meme before memes existed. Heathcliff doesn't need to have sense because it defies the conventionalisms in the comics strips of the newspapers, it's subversive but also it contains aspects of nothingness where the readers expect to see, a hidden social commentary. 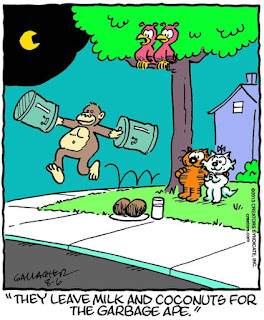 The most non-sequitur aspect of the comment is not the helmets, the strange outfits, flying cats with bubblegum but it's the garbage ape, there can be interpretations about what is the garbage ape; is they a figment of the cats imagination? a construct that they see as the waste management workers going by? It's difficult to say, as it contains elements of David Lynch products where there is no objectivism to understand reality but rather to be absorbed in an universe where sense and reason would emotionally scar Ben Shapiro.
The cartoons versus the comic strip, the comic strip evolution of Gately over his nephew Gallagher, is as two different universes, a what if? Even if Gately introduced the no sense concept, there was some form of conformism that eventually got discarded in favor of anarchistic and Dadaist concepts by Gallagher.
References
Posted by Gus Calvo at 9:06 PM