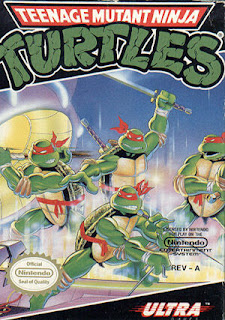 I had played this game on a few occasions, but thanks to the wonders of ROMS, I been rediscovering a lot of the old games I used to play back in the early 90's and late 80's, Also as time passed by I been rediscovering the joys of my talents and hobbies, and starting to illustrate and one my loves had been video gaming because it was a form of escape but also entertainment.

I loved TMNT as many kids in the 80's and 90's did; my first exposition wasn't the cartoon itself but rather on a corner store o tienda del barrio, the owner had in the table the first two issues of the original comic and I was mesmerized, because the 6 years old me loved the super action and gore inside the issues - about a year later I saw the cartoon and even if it was different it got my attention.

You have to think those days we didn't had Internet at all, the only medium of information we had were related to Club Nintendo and any other PC Magazine; but one day when I went to a play date on the house of a friend, he suddenly had this game of the Turtles and I was fascinated because it was the first time I saw one in my life, and it wasn't until age 35 that I would play for the first time the og arcade game, and still the love of the franchise makes me smile. 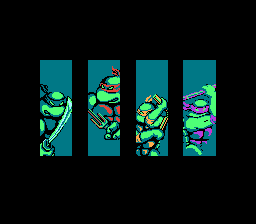 The game wasn't like the cartoon, it was more close to the comic books than anything and as the comic books the game is brutal, for 3 decades I been thinking how the developers (Konami) could do something as difficult within only 2 Megabyte cartridge - opposite to today as the ending of 2020 where games go up to 20 Gigs and more, a lot of them don't contain the level of difficulty that this game has, this is as precursor of Dark Souls on is own splendor.

You as a gamer have to think that now we have a system or forgiveness within gaming, that let players go unscathed or at least learn form the mistakes, that system wasn't on early gaming, I guess the first time ever was with the Konami Code which is a beautiful accident, but let the players enjoy the gaming by "cheating' and probably the best way to enjoy this game is with save states, you could say it doesn't have the same satisfaction as defeating on an honest way but some games they don't really need to play to suffer, but play to see the little tricks the developers used to make it difficult whenever the resources where scarce. 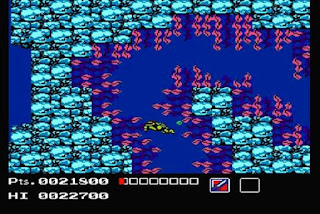 The Hudson River level is the most popular one, but overall the entire game is difficult, and is difficult not only because of the level designs but rather on how wonky the time reaction on the controllers was, you could die so easily by hitting by accident the pad and swimming against the electric weeds but also any jump could kill you, the enemies respawn quickly just like Ghouls N' Goblins and you couldn't breath.
It's a nightmare to play it but it's incredible because it has a lot to offer and tells a story whenever the consoles were still young and developing in to bigger games but it contains a story and it doesn't flank with the pace.
The music is vastly different in the game from the television, but also it match more the tone of the comics rather than the happy setting that the cartoon offered for 7 seasons before it turned more grim - there is also something more charming within on how dark this game soundtrack is because you can feel the frustration within the levels but also it encompass the grim vision of Eastman and Laird work with the early comic books of the Turtles. 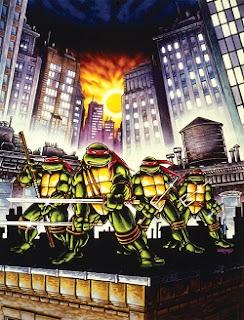 I am trying to situate how this game being one of the first marked a generation, but at the same time it's a product of is time - there was no other reference for the Turtles back then before the sequels that adapted a lot of the visuals from the cartoon and became more funky and playable rather than the first home console game.
The curiosity with this release it was that inside the game we have the Turtles with their respecting Tokustasu in which it marks somewhat their personalities but leadership, albeit on the box it goes with the red bandanas for all of them, but the most weirdest thing was the localization in Japan where they turned April in to Splinter's daughter.
The more I see the game and research about it, I think it was misunderstood at his moment because of the mixed reviews, but at the same time I think the game itself was one of the first games produced and developed by Konami whenever franchises were relative an unexplored territory on the video game real and is interesting because if it wasn't for games like TMNT that were a peak of his time and X-Men just to name two we wouldn't have too much of third party intellectual properties that were developed on other mediums before going to video games of being developed exclusively for the consoles instead of bringing an adaptation.
Posted by Gus Calvo at 12:47 AM