The Murder of Norman Fry

Lately, I been regaining a lot of energy to write again, cold cases were my favorites whenever I was working as one in Colombia on the short time I did it after and during college, what sparked my interest was the murder of Rolando Perez (Link is in Spanish but there is always the option of Google Translate) because the case between Rolando and Norman have some similarities, there is a discrepancy in the police report and there is a possibility the investigation didn't went further because of homophobia on the Gainesville Police Department back in 1978 which is similar what happened to Rolando on 2007 when he got murder in Cartagena - Colombia.

The only two reports of the case (as of 7/2/2020 I am going to try to get a copy of the file, if is still available) are a small synopsis of his case on Cold Cases Copy and a copy on The Independent Florida Alligator, which on two websites I took the liberty of getting a copy of each in case they will get deleted by a random act of destiny.

To start we are going to go with the short police copy that is on the cold cases website:

Norman Fry
#78-41569
On Tuesday, November 14, 1978 at 9:00 am the body of Norman Fry, a 38 year old white male, was found at his residence of 3444 NW 10 Ave. by his 4 year old son. The victim was known to be homosexual and unemployed at the time. He had recently been employed at UF. The victim’s vehicle, a 1973 yellow Pinto was taken at the time of the murder as well as a foreign stamp collection, a pocket knife and an ace bandage. The vehicle was located a month later near 1300 SW 16 Ave. The son indicated that they picked up a hitchhiker or two, one of which had blond hair, and brought him to their home. He said he saw the hitchhiker going through his father’s clothing at home and he took his grandfather’s pocket knife. The victim had last been seen by the babysitter that evening when he picked up his son.

The problematic part of the police report and this is the reason I believe the case was left cold because police didn't see it as worth due his orientation, it involves that the agents coached the wife of Matt Fry, Bess Fry to not say murder on any declaration which itself that should be an opening to reopen the case because of discrimination and lack of handling on the victim.

Re-tracing the steps of Norman, is a little bit problematic after 42 years; the only information that is placed with a match is that he worked on University of Florida but he seems he got fired on a few weeks prior his murder, the problem goes that the cause of murder don't coincide - the Assistant State Attorney of that time Billy Malphurs, - couldn't specify the real cause of death, as he contradicts his testimony if it was an external injury versus internal trauma - police report also contradict everything on the piece of information versus the external investigation, the son of Norman mentioned they were two hitchhikers while in the report says it was maybe only one (I hope I can have access to this public records of his examiner and information on the murder scene, even if 41 years ago it was denied to the two journalist who were investigating)

Now another part of the contradiction involves on what really happened that night of November 14th of 1978, we have to organize the story as there are two perspectives on this story one is that Norman was murder when he was cruising for escorts which is the version the police gave, now the second perspective is based on Norman's son Matt, which was roughly four and mention the description of the individuals.

On the two versions the only aspect of the report that is equal are the items that were stolen, which with the few pieces of information we can assume the killers were in Norman's house before and knew what they wanted, I highly doubt they were hustlers because if Norman was living a double life he wouldn't take them to his house, and he wouldn't risk his reputation even if there is some sort of liberal mindset in Gainesville, he wouldn't be as reckless knowing there are plenty of hotels even when the city was developing back in the 1970's. 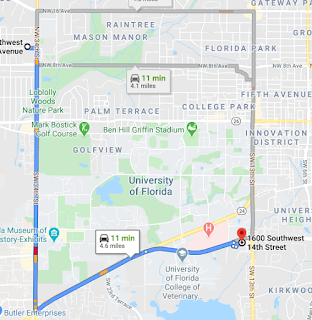 I suspect the ordinarily public report has the identity of the murders, because they had to be familiar with the area and they didn't went to far which I firmly believe where some of his students or former students that were looking for a tutor. Part of my questioning on this murder if is University of Florida still has some of the records from 41 years ago that could say and make public why he got fired from his position? Any list of students that fit with the characteristics Norman's son gave in case the police doesn't want to release the records.

Why I am saying this? Because if it was someone else, people who were more familiar with the city or at least knew how to drive, they would had planned their strike carefully and not in such a reckless behavior, part of my hypotethis is also funadmente that the murderers had ties with wealthy family in the North Florida area and their parents pay for the police silence but also to avoid the records being released, and if money was a factor that would explain why the coroner didn't say anything on any interview towards Norman's topic.

The other part that I believe is a cover but also part to discriminate against him, is to mention that he was gay and that he was looking for sex outside; I know the historical setting and that Stonewall was relative recently within the last decade but the story that is given in the cold cases section and the few prints of newspapers doesn't match and I think his killers could be still alive.