Metro Con and How you Can Grow Beyond your Founder

This weekend would had been Metro Con last year, but Metro Con this year would had been held on the 11th to the 14th of July but due COVID-19 the event got cancelled and even if it was a low punch, we understand the circumstances and there is always one in the future that I can always go.

Metro Con for me is my first convention ever, I went to the conventions when I was 32 years old, I went because a former friend who knew I followed certain Youtuber, so she asked me to go with her and I said OK, I was mesmerized by the convention as it was my first event ever but that's a story for another day.

I find the story of Metro Con fascinating because there are plenty of activities, great cosplayers, the vendor's hall is a little bit small and the merchandise is not that varied but still you can find cute things and there is not a big artist alley but the soul of the convention are the cosplayers. A lot of the people that go are super creative with their cosplays, and is just fascinating to take photos but also to see what the cosplayers will do every year.

Continuing with the convention cases, this example goes with the San Japan case I exposed not long ago in which the founder got involved in a problem because he got exposed saying racist commentaries about guests followed by an empty excuse on Facebook in which he said he only followed whatever the attendees want.

The aspect on this case is what Metro Con did to linger out of the founder's image after he got arrested for statutory rape on 2009, which several reports indicated that over the years he was in to predatory practices before being arrested and subjected to register as such. 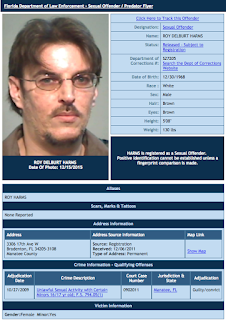 Looking at old articles, one from Anime News Network when the problem happened, the current CEO and Owner Alex Craddock "Roy Harms is our CEO, and a very close friend of mine. I trust him with my life, my dreams, and my 4-year-old child, and so would anyone else that has ever met the man." He continues,

"An arrest does not mean a conviction to or admittance of the crime being charged. In this particular situation there is one thing required for an arrest to be made, and that is a claim."
A problem with that statement, is that people seems to had forgotten about it, but even so Alex kept part of the promise that he made in the public statement 11 years ago and made the event family friendly over the years, and there hasn't been any sights of Roy inside Metro Con but that doesn't mean he still active.

Another problem and Alex statement is that Roy was convicted but not incarcerated, a quick search on the Florida Database he is still there, he got registered and he still subject to visitations from the county, but the problem is that even with visitation Roy was still present outside of Metro Con, such as 2017 in Holiday Matsuri and Omni Expo around 2016, even his Linkdn profile marks him as active on public events as a Trade Show Consultant which is somewhat hypocritical that he has still somewhat of a controlled access to a computer but there is no way to find if he is active on social media, but even a small search around Twiiter pop results about his doings being a sexual predator.

Now, what really happened that people essentially forgot about this scandal? The answer is no, people who are familiar with the development of Metro Con and have been going through the years they still speak about this incident, and people who are newer but get well positioned within the convention scene they also know it, I learned from a friend who has been going there from 12 years and it chilled my spine because is somewhat of an open secret.

But, the operations and how the event is promoted has essentially distanced from the era of Roy Harms, which from the information I had found under the tutelage of Alex has been positive and more fan oriented events had been placed inside the convention, but also they had brought people that are meaningful and varied within the guest spectrum over the years up to the point that as time pass by, there is not too much mentioning of Roy Harms at all that he was ever the person who founded Metro Con.
Posted by Gus Calvo at 12:52 AM