The Royal Family of Hyrule, The Shadow Temple and the Holly Inquisition Part One

I can't stop seeing this parallelism on the real world case that the Royal Family of Hyrule with the Spanish Inquisition and how the Royal Family consolidated their power through the blood of the goddess.

Is not weird to see the similarities as the ultimate means of the Royals to consolidate their power became religion, the religion centered in Hylia, the Triforce and the miracles executed in the Royal Family first born daughter who was always presented as the avatar of the goddess. The idea of centering a figure as the maximum authority is not strange in any religious organization, from the Pope to the Elders, there is always someone and Zelda plays the role or at least could be seen as puppet leader in which the shadow lead uses for the expansion of the ideology and the kingdom.

What is the hypothesis of my theory? If we use the unified timeline or dragonbreak as we can call it also call it, we can find a parallel that the Royal Family had an interest into unifying their religion centered on Hylia and abolish any potential ones that could create competition towards their power and hegemony on the land such as the Spanish reconquest of the Iberian Peninsula that was ruled by the Muslim in 1492, but to explain specific to regain control of the geography as because probably there was a riff and the family lose power before the Great Calamity.

We can see different religious fetishes and totems around Hyrule, i.e. Breath of the Wild, where the Seven Heroines are reverb or the Desert Colossus (Goddess of the Sand) in Ocarina of Time which show the difference in religions which for someone or a group that looks to execute their power that could a problem, as the act of proselytize could bury older religions and bring new adepts but subjugate and exterminate large ethnic groups.

There are similarities between antisemitic attitudes that many people held towards Gerudo's and even Sheikas, similar as the 13th Century up to the 14th Century Spaniard anti-Jewish sentiment similar as the riots that happened in Barcelona, which I can relate to the Hyrule Civil War that unified Hyrule under one banner but at the expense of the permanent lost of lore, language and traditions from tribes that weren't related to the Royals.

Albeit during the game there aren't specific examples towards conversion, but rather vague quotes that gives hints about the history, it makes me think what initiated the Civil War was that the King of Hyrule in the Ocarina Timeline timeline was extremely similar as Peter the Cruel and started a way just on a mere impulse in which he saw infidels on other tribes based on his own insecurities but also on what the cult centered around his daughter and the Royal Family as the guardians of the sacred power was placed. 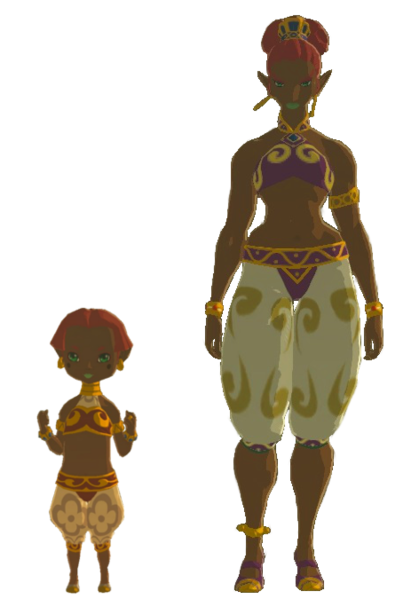 The hatred Hylians and other races had to the Gerudos had over the different timelines borders the antisemitism that has been presented on with the Jewish population over the centuries, but also it can be taken on the Islamophobia as is a tribe that historically speaking with the franchise had been prosecuted because of the idea they are thieves but also they are a threat to the status quo or in better words the escape goat or the justification to preserve the Royal Family in the power.

According to Don Hasdai Crescas, persecution against Jews began in earnest in Seville in 1391, on the 1st day of the lunar month Tammuz (June).[16] From there the violence spread to Córdoba, and by the 17th day of the same lunar month, it had reached Toledo (called then by Jews after its Arabic name "Ṭulayṭulah") in the region of Castile.[17] From there, the violence had spread to Majorca and by the 1st day of the lunar month Elul it had also reached the Jews of Barcelona in Catalonia, where the slain were estimated at two-hundred and fifty. So, too, many Jews who resided in the neighboring provinces of Lérida and Gironda and in the kingdom of València had been affected,[18] as were also the Jews of Al-Andalus (Andalucía),[19] whereas many died a martyr’s death, while others converted in order to save themselves. (Wikipedia)

But who were the core cult who preserved the the Royals? the similar to the Holly See, the answer lies on the Sheikas. Their role in the rise of the first family of Hyrule is quite complex because they are their bodyguards but also there is a parallelism on being clerics, since they seem to know and profess the message of the Goddess. The story of the Sheikas can be scarce and it adjust on each timeline but there are two games in which the players can see the roles of they are Ocarina of Time and Breath of the Wild.

The Shadow Temple and the Bottom of the Well are the two spots to see the torture devices and locations in which the Sheikas mimicked the inquisitors techniques of torture such as the rack that is seen in the photo to the left, which to explain in an easy way would break someone's back but also pull every single limb out of your body, which can explain the poodle of blood that is bellow the torture device.

The Sheika's were ruthless but also fanatics on their devotion to Hylia that they would support a war to protect the incarnation. Albeit on a far point within the timeline such as BotW the tribe that is presented is completely changed and has taken a more agricultural and trader because of the Great Calamity influence over the land.

The evolution of the Sheikas on the unified timeline probably offers a different interpretation as there are no signs of them on previous incarnation and they are more focused on them as a revolutionaries with technology, which itself is a contradiction in reference to them as Inquisitors in the real world because the Inquisition set back technology and human advancement several centuries behind, even on Hyrule Castle the traces of torture chambers are almost none existent.
Posted by Gus Calvo at 7:27 PM