Fallout 76 is just a modern retelling of The Oregon Trail

This is just mere joke from my part, or a crazy theory but what if The Oregon Trail and FallOut 76 are placed in the same universe? For starters the two games set a close proximity to each other in terms of geographic location, where the protagonist is connected from Missouri and West Virgina in terms of history but also mobilization; in modern times we have I-64.

The geographical correlation between the two games could be a starter in which hints of the apocalypse mostly because the similarities found in the flora, fauna and biological agents that have a correlation  with the mortality in between the games and how much affect the players development i.e. dysentery in the Trail of Oregon and an evolution of the enviroment because of the nuclear war in the Fallout 76 game.

We all know that evolution is a constant process, take a look of the Galapagos Finches that in less than two generations they evolved in to a new species; which two generations span around 40 years and in between a couple of centuries and with the proper catalyst (nuclear catastrophe) a simple viral or parasitic infection mutated up to the point that affected everything around it gained the ability to kill almost instantly anyone. 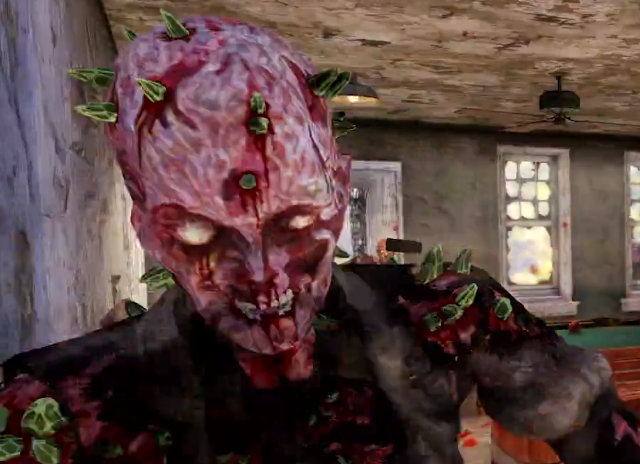 Let's imagine the scorched, beings who used to be human and were infected by a plague who left them on a semi-conscious state in which they aren't full humans but not full ghouls as they retain their knowledge of who they have become but not who they were. Probably it was.

The Scorched where formed because of a plague, and the plague was product of a biological weapon that the key component was made by an underground fungus found on the Appalachian system; fungi are also common to be used within the Cherokees apothecary medicine as well into modern medicine. So we shouldn't be surprised that Arktos Pharma  experimented with some other agents to create a biological weapon powerful enough that would destroy a complete ecosystem.

Maybe, the staff from Arktos Pharma knew that dysentery on their Earth was powerful enough to kill people back on the 1800's and just used  what they have in their disposition to change the panorama of their world.
Posted by Gus Calvo at 1:19 AM