How Any Upcoming Zelda Games Should Take Inspiration From Chrono Trigger 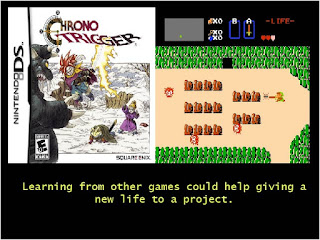 (3/18/2016) --- Chrono Trigger and The Legend of Zelda are two of the most emblematic games within the niche of the market back in the late 80's and early 90's. The games still resonate within the imagery of the public as well the generations who played them; in fact The Legend of Zelda (1) is still popular and the franchise had developed into multiple spin-offs while Chrono Trigger (2) only had a few off-shots including Chrono Cross and Radical Dreamers.

Players have to understand that these two games created an impact in the imagery of the players of each generations and influenced developers within the next decades.

As any other franchises Square sequels with the Chrono project didn't had the same economical and social reception as the first installment, besides the lack of organizational approach the developers wanted to take (3).  The Chrono series itself offered a very defined aspect in the world of storytelling, it was precise but at the same time gave the players the chance to explore a complex world that surrounds La Guardia. Then in 1998 we got one of the seminal games of all times, Ocarina of Time (4), the game essentially changed the modern panorama (5) and there is an expectation that Zelda Wii U will achieve something similar. What is interesting that both games contain similar fantasy elements and were similar successful on their own time is that Zelda prevailed on a commercial ground.

Zelda itself could learn in terms of continuity and gameplay could learn from the success of Chrono, as both franchise at a certain point had used time-travel as a storytelling resource, probably by technical issues when Ocarina of Time hit the market contained less space for a bigger scenario but as time and technology progressed within the industry, maps became as big as the game story mode.

The Legend of Zelda had reached a point that it the time frame of the chronology got divided into three different timelines (The Fallen Hero, The Adult Timeline and The Child Timeline) and the story of the game became quite convoluted, not to mention sparse as different Links appeared on the games, all justified by endless cycle of reincarnation. Almost being as a cruel joke to live in an eternal existence of misery and suffering (6).

The Wii U version could update the idea of time traveling by placing Link to interact with different eras much as it happened with Crono, in another case it could still follow the interaction between Hyrule, Termina or Lorule and let the player play on the different dimensions of the multiverse. There are so many different options to explore within the development of technology and the creative use of storytelling to revitalize the franchise back as it was on the golden days.

The incorporation of playing as multiple characters or adding a party wouldn't be a bad idea either, it won't turn the game into another RPG or a clone of Final Fantasy; the idea of multi-characters interactions is already been explored on Hyrule Warriors - even if it's not part of the canon, it gives a fresh perspective on the story of the Hyrule Fantasy -.

Using a certain set of characters through the game and giving a direct continuation to what happened to the previous ones. Bringing a more complex villain that don't fit on the Ganon archetype could be awesome. Thinking of a Machiavelli villain as the Queen of Zeal in which she showed hate and was in a search of immortality, without even hesitating into sacrificing her own daughter to obtain such power.

The Interlopers or at least characters that could be similar could be the best villain as they seem to be more complex on their machinations. Being them the Twili, as well with their previous history of bringing chaos they could be  used as the best villains to explore topics of desolation and power. Instead of finding the villain who only wants some personal gain through a powerful artifact or as well his disciples who aren't far away from their masters persona.

Inspiration could come into exploring further time traveling, the Time Stones and how the Ocarina was created could give some interesting plot lines to the games. Letting Link be more freely and let the players know more about Hryule without being too cryptic about the world they are playing in.