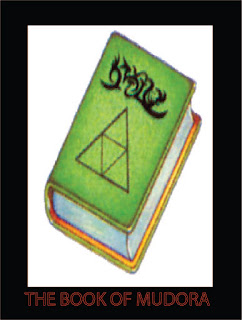 (3/15/2016) --- Hello everyone; on this entry we are going to explore a little bit the myths and theories behind the Book of Mudora. As much of the Zelda fanatics know the book of Mudora is an item that at first appeared at Link to the Past as a tool that assisted Link in order to translate the ancient Hylian Language.

It became the book with the core beliefs of the Hylian culture, the prophecies as well the language. The book became much of a central book of the beliefs and theism of the culture; in other words the idea of the Book of Mudora being an analogue of the Bible, Quaran or the Torah.

At the same time the book projects a more serious approach on semiotics and the theory that mostly the Book of Mudora is a composition of the evolution of the Hylian language. It is not strange for a cultural group of people to let dedicate a study of the evolution of the language or the applications. In other words The Book of Mudora could be a treaty on Hylian semiotics instead of being some sort of holy book; but at the same time we all know that language plays an important part of the lore within The Legend of Zelda; language within the folklore that is shown in the game it is shown as almost sacred, a tool in which the users can change the world.

If you have some time, I recommend checking on this link in which there is a complete explanation on how language evolve. The common denominator in the evolution of the language is set on the parameters and conventionalisms where a group of individuals set in order to interact between a channel. All of these has to go to the assumption that the understanding of the meaning vs. the object has the be understood by all the parties.

Translation from one language to the other is just of finding the interpretation on what vocable superimpose other in each language as well how to create a linguistic synapses between the communication process. All these process (that I probably just explained as short as possible) can take as little over 20 years in which words evolve and all over the course of a century.  Which is the same case within the Hylian language on the different timelines, which all of them show an evolution of the communication process that takes at Hyrule.

On one side of the graph we have Old Hylian and on the other we have New Hylian. Old Hylian was the common text found in Ocarina of Time while New Hylian being the a direct successor on the timeline.

Both set of texts have influence on Hiragana and Katakana syllabary, albeit the presentation is rather cryptic due the developers not containing a proper design on the writing system of Hyrule but if we use the Japanese system as a starting point we can interpret that the alphabet evolved (depending on the timeline) towards a complex system similar as the Kanji.

Now going back on the very beginning, the Book of Mudora has a relation towards the evolution of Hyrule since the Era of Creation. Not by containing the prophecies per-se but rather the tools that gave the future generations to settle and flourish; because if it wasn't due the influence of language there wouldn't be any kingdom or cities.

Thank you for reading.

Email ThisBlogThis!Share to TwitterShare to FacebookShare to Pinterest
Labels: game theory, semiotics in video games, The Legend of Zelda, the legend of zelda a link to the past
Location: Tampa, FL 33647, USA