(9/17/2017) --- I love Monument Valley, first part and second part. The game is not only visually astounding, the puzzles are fun, the art is amazing much as it incorporates tessalations and hyperbolic geometry; also there are metaphisical elements such as the idea of life and death and mother - daughter bond about growing up and finding your own path.

The second part continues with the formula as the first game, it follows a new character named Ro and her daughter in which they come in terms that different generations can't work without each other but also we grow as our parents start to get older.

There is a beautiful symbolism towards the game, a beautiful story that is told without words, as well the perception into reaching the sacred geometry (1) as a form of spiritual growth.

As the first game there aren't many inferences of dialogue that can be a concrete point on the story; much of the story is just left to the player's imagination and how they interpret the symbolism within each puzzle and each scenario.

Within the interpretation of the story, there is a point in which I saw the game could be taken as from the narrative of Ro's daugther when she embarked into her journey of development through the different mazes that compose the sacred geometry.

One aspect of the game that it takes the charm is that is too short; it can be completed within a couple of hours and there is not enough difficulty that can challenge the player; but the difficulty is the least, the part that makes the game less enjoyable is the length. I wish if there is a third part, it could take more time to defeat, more time to enjoy and more time to appreciate the beautiful M.C. Escher inspire scenarios. 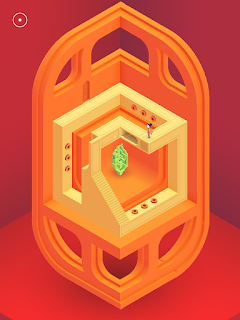 The tessellations (3) that are a core element of the games give  a very unique distinct future on the aesthetics, the minimalism that is inspired from the Japanese art are the elements of the gameplay that set from other games in the market. It is quite easy to spot the art of any of the two games.

The forced perspective and every aspect that seems to defy the Newtonian Laws of Physic, can make a player imagination spark towards the adventure, albeit the narrative in which the timelines collide is what gives the game a new meaning on to tell a story with little or no words.

What would you do with time? If you can manipulate it and be able to revive the days you lived long ago?  Would you go and think about your mistakes, the old friendships that you had, what would you do? To fix it the mistakes or to go and continue with your life, even if time is fixed and even if you could revive those moments, those moments are just mere memories.