A Not So Hypothetical Zombie Apocalypse 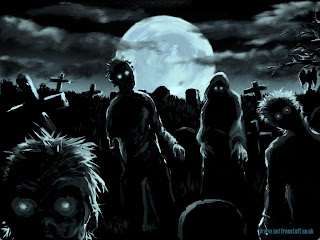 Tampa - Fl ; It is not strange to think about all the possible futures regarding any incident about biological welfare and genetic manipulation, think about The Walking Dead, The Night of the Living Dead or any movie with zombies and viruses spread through the environment. The reality could be even scarier than the fiction because if a multinational that is dedicated to warfare discovers a string of the venom of the Jewel Wasp and could develop a potential threat that would mimic a Resident Evil in real life and the consequences could be catastrophic.

Reality is not stranger than fiction, the problem is when fiction puts hypothetical scenarios that aren't far away from reality; let's think about Raccoon City and Resident Evil games, where a string of the T-Virus caused the demise of an entire city in matter of  months and thinking about that possibility to be used as counter attack in modern wars it is scary but not weird to happen.

Let's explain another scenario, a more realistic one but observed on a micro event; under the correct circumstances people would be acting as mindless drones, this scenario could be split into two sets of consequences with similar reactions. The first line can be classified with the influence of opinion leaders that would move the masses to fulfill their own agenda, i.e. A pastor would preach on his sermon to vote for certain politician, creating a lobbying situation, his followers would listen to him without generating any questions if the people get questioned why they follow their opinion leader, they will react in a negative way without generating their own doubts regarding about their decisions. Example number two goes with sports. 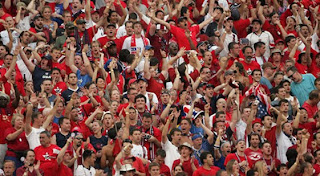 If you place an entire group of people in an enclosed space, where they can satisfy their most primal instincts specially at the moment of sports because if you offend their team then they will attack you with no provocation or if you are in a game and their team lose, there is a chance that the true fanatics will become zombies and verbally and physically assault people from their opposite teams, much as zombies would attack any helpless victims.

There shouldn't be fear of the un-dead themselves, as a wild beast they could be in theory, they can be put down without any inconvenience if their motor skill center is shut down or damaged enough to avoid them keep moving, but zombies do exist albeit not in the way as they are portrayed in the media, as reality offers a more macabre panorama where puts the zombies as mere puppies.
Posted by Gus Calvo at 6:16 AM